Your Main Character's Name Means What? 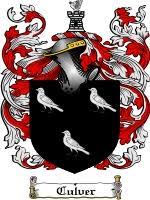 Many readers of "The Martin Culver Series" have asked me, "What is the significance of the name Martin Culver, your main character?"

I was searching for a name that was short, two-syllable words, like my own name. Similar to myself, Martin Culver has no middle name.

In addition, most series fans know that  historical research always plays a part in these fast-paced action adventure novels. The same is true for many of my  character names. Here is the straight answer on my main character's name.

Over the course of 8 novels in "The Martin Culver Series", Martin Culver has battled though extended war-like conditions to find limited periods of peace. This conflicted, unsettled existence is foretold in his very name.
Martin is an ancient Norman name that arrived in England after the Norman Conquest of 1066. The name Martin comes from the Latin name Martinus, which is a derivative of Mars, who was the Roman god of war. The surname CULVER was an Old English locational name 'the dweller at the sign of the dove' or 'one who keeps doves'. Surnames originally denoted the individual's occupation, and at times, their disposition.So then, the name of Martin Culver is taken from the Roman god of War, and from 'dovekeeper', or 'dovelike'.  War-like and dove-like at the same time.
The name Martin Culver literally means "War and Peace".
Posted by MM at 6:53 PM